Martindale’s projects have been featured on countless prominent websites, and in traditional media such as print, radio, broadcast television and film. His practice has a global following and has been written about in countries all over the world, in multiple languages. Martindale was profiled for the first episode of CBC’s Great Minds of Design, one of his lectures was filmed by TVO for their Big Ideas series, and his work was included in the feature-length documentary This Space Available, released in 2011.

The Toronto Friends of the Visual Arts (TFVA) awarded Martindale their prestigious Artist Prize for 2012, and the Ontario Arts Council granted him a Chalmers Arts Fellowship in 2013. He holds an MFA from the Interdisciplinary Master’s of Art, Media and Design program at OCAD University in Toronto, and a Bachelor of Design from Emily Carr University in Vancouver. He was the Decennial Hancock Lecturer at the University of Toronto’s Hart House where his work was on view in 2011. Martindale has taken part in multiple solo and group exhibitions, and his projects have been shown in Montreal, Madrid, New York, Shanghai, Hong Kong, Shenszhen, Victoria, Vancouver, Venice, Birmingham, Bristol, Liverpool, Oxford, London England, Las Vegas, Lisbon, Charlottetown, St John’s, Minneapolis, Paris, Angers, Brussels, Berlin, Prishtina, and Doha. 2012 marked the opening of NOW, Martindale’s major two-person show with Pascal Paquette at the Art Gallery of Ontario as part of the AGO’s Toronto Now contemporary project series, and he has since exhibited work multiple times at the gallery. His work has also been showcased at The Royal Ontario Museum for Hot Docs, Toronto’s City Hall for Asian Heritage Month, Art Souterrain / Nuit Blanche 2013 in Montreal, and the Art Marathon Festival 2013 in St. John’s Newfoundland. In 2013, he was the lead artist on the tallest mural in the world, the result of a community project in St James Town, Toronto, with local youth, STEPS and the Toronto Muralists. Martindale has continued to lead other notable community arts projects, and has taken part in a number of residencies. Among recent projects was Martindale’s major installation outside Toronto City Hall for Nuit Blanche Toronto 2015. In 2016, Martindale returned from installing three works for ECOWEEK Prishtina, in Kosovo, where he was an invited lecturer and workshop leader. Martindale was recently awarded a permanent public art commission for King Station in downtown Toronto.

In 2018, Martindale had the honour of being Harbourfront Centre’s inaugural Visual Artist-in-Residence. In 2018 and 2019, Martindale and his collaborator JP King were also the first Artists-in-Residence with the City of Toronto, Solid Waste Management Services.

We acknowledge the support of the Canada Council for the Arts, which last year invested $157 million to bring the arts to Canadians throughout the country. 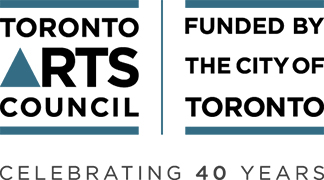 I gratefully acknowledge the support of the Toronto Arts Council.